Posts Tagged All the Bells

The event was masterminded by Martin Creed and the aim was to ring all the bells in the country as quickly and loudly as possible for 3 minutes. It was timed to be exactly 12 hours before the opening ceremony of the Games, which starts at 20:12 this evening.

At St. Michael’s Church, Boldmere in Sutton Coldfield we chimed the heaviest 6 of our 8 church bells.  An official Olympic volunteer at the football in Coventry, Debbie, came along in her (very smart) uniform to support us and took the picture below (I’m the one in the middle with the black T-shirt). 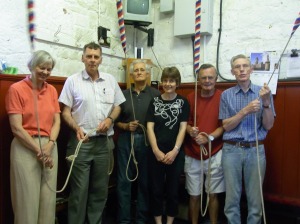 All this Olympic mania made me wonder what happened to the 100 chosen to be ‘Olympic Storytellers’ after the invitation for us all to apply last year. I wasn’t successful and have heard nothing about it since. But a quick trawl of the web has thrown up the Olympic Story Tellers’ Website. Here each of selected writers has published their news and views of the Olympics. There are poems, photographs and blog posts – take a look if you get a minute.