The picture shows the ringing chamber at Staunton Harold church in Leicestershire. The church is cared for by the 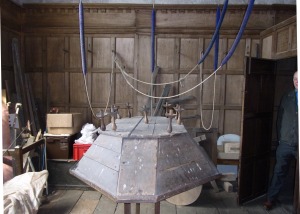 National Trust and has 8 bells – these haven’t been rung since 1998 due to worries about the structure of the church.

When the volunteer guide discovered that I was a bell-ringer he offered to show me the ringing chamber, which isn’t open to the public. We went up the usual spiral staircase and into a chamber that time forgot. The blue sallies (the furry bits) on the ropes were thick with grey dust and the room seemed to have become a dumping ground for anything and everything.  There were a couple of peal boards on the wall recording the ringing successes of earlier generations but what I found most interesting was the ‘music stand’ in the centre of the room.

I’ve been ringing since I was a teenager but have never seen a ‘music stand’ in a ringing chamber before. The ringers would place notes on it to remind themselves of what they were going to ring (usually the ringers have the pattern of changes in their heads or it is shouted by the ringing master). In the picture you can see candle holders on the stand that would have been essential on winter practice nights before electric lighting.

I was very grateful to the volunteer guide for allowing me this peek into history.

What has this got to do with writing? Nothing directly, except that I found it interesting and wanted to bring it to a wider audience – and all my attempts to get an article on bell ringing published have failed.

But then I got thinking about all the generations of ringers that have stood in that ringing chamber – big burly farm hands, soldiers who perished in the world wars, the first women to learn to ring etc etc. Could there be a family saga set around the church and its ringing fraternity? Or maybe a short story about a mutiny amongst the ringers? Or a Midsomer Murders type tale?