Posted by Sally Jenkins in Events, Lifestyle, Non-writing on January 4, 2020

I took part in my first Park Run this morning – 5 km (3 miles) over varied, undulating terrain in Sutton Park. 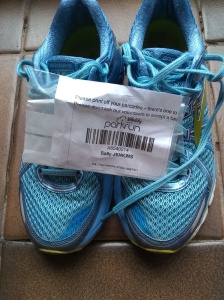 Park Runs are held all over the country at 9 am on Saturday mornings. They are free and anyone can take part. All standards of fitness are welcome and at Sutton Park there was a sign ‘Walking Group Meet Here’ – so there was no need to even run. The events are organised and marshalled by volunteers and there is a friendly atmosphere geared towards encouraging everyone to get outside and move more. The only preparation needed before joining a run is online registration. This is a one-off process which generates a unique barcode for each runner. This barcode must be printed, taken to the event and scanned once you’ve crossed the finish line in order to get a time for your run.

At Sutton Park there was a briefing just before the start for first-time runners. The course was described and I had second thoughts when ‘Hill of Doom’, ‘trip hazards’ and a ‘single file wooden bridge with a slat missing’ were mentioned. My aim became to get to the end without falling over.

With my eyes on the ground I successfully negotiated the hazards. The ‘Hill of Doom’ was short and very steep, so I have to admit to walking here. Everything became easier once the course hit tarmac and I became a lot more confident. It was downhill to the finish and to that lovely feeling of having accomplished something.

Park Run results hit the website later the same day. My time was 34:45 and my results emails says, “You finished in 272nd place and were the 78th female out of a field of 398 parkrunners and you came 5th in your age category”. I don’t know how many were in my age category but 5th will do me!

The similarity between writing and running has been pointed out many times before and my Park Run brought it home to me again. Writing and running are both hard work and we don’t always enjoy the actual process – but the ‘high’ produced by having run or having written can’t be beaten!

Posted by Sally Jenkins in Markets, Non-fiction on March 3, 2013

I bought Women’s Walking magazine this week, for two reasons:

As far as market opportunities go, I’m not too hopeful:

Flicking through the pages and looking at the credentials of some of the magazine’s contributors tells me that I’m not qualified to pitch anything remotely related to the Health, Nutrition, Workout and Fitness sections of the magazine.

There’s a couple of ‘Real-Life’ features, one about a woman who lost seven stone by walking and another about a woman who walked her way back to health after an accident. Nothing so dramatic has happened to me (thank goodness!) so no openings there.

There’s a ‘My Life’ page, which tells the part that walking plays in the life of one individual woman. This month it is Pippa Kendrick, a published food writer – so I don’t think they’re looking for any Tom, Dick or Sally.

That leaves me to dream up a more general article. The magazine includes one this month on charity fundraising (for sponsored walks) plus a list of the best walking marathons. I’ve done a few 26 mile walks, so I wonder if I could do something along those lines…

But I think the best place to start is with the letters page – there’s a pair of walking shoes worth £90 for the star letter, nothing for the others. Nine letters were published in issue 2, mostly praising the magazine and describing what walking means to the writer. I’m going to think of something different!

And is it possible to devote a whole magazine to women’s walking? It appears so but there’s also lots of stuff in there about general fitness and equipment too. I particularly liked one of their tips for getting a flatter stomach – apparently a good night’s sleep is essential, people getting between five and six hours sleep have bigger waistlines than those sleeping for seven or eight hours – I like the idea of toning up whilst I’m dreaming!

So what do the rest of you do to combat the sedentary life of a writer? I go to the occasional BodyCombat class – lots of kicking and punching at an imaginary partner is great for getting rid of aggression – and I find swimming helps me think.