Celebrating on a London rooftop!

Posted by Sally Jenkins in Competitions, Events, Successes on August 19, 2016

Last night I and five other short-listed authors were sipping sparkling wine in the rooftop garden of Hachette UK. Also among us were the team from Writing Magazine, several of the authors published by the various imprints of Hachette, editors and literary consultants. Earlier in the day we’d each made a short video interview in the Darwin room (Origin of the Species was one of the first books published by the company). It was all exciting stuff! 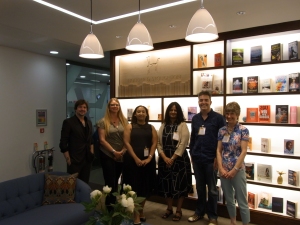 The six of us had been shortlisted from 130 entrants in the 2016 Just Write Creative Writing Competition organised in association with Writing Magazine and John Murray Press. The competition asked for short stories of 4,000 to 8,000 words in any genre and on any theme.

In true award ceremony style, the name of the winner was taken from a ‘gold’ envelope and announced to the waiting crowd. Emma J Myatt was the worthy winner and we expect great things from her in the future! There followed lots of chatting to literary people and I got encouraging feedback for an idea I have in mind – something to work on for the future …

We all came away on a high, with goody bags full of books plus copies of the newly-printed anthology containing all six of our shortlisted stories. And we were kept busy signing the anthologies for lots of the other guests to take home – I felt like I was famous as people kept pushing books in front of me to sign!

Many thanks to everyone involved in organising the event and I’ll be watching for my fellow shortlistees – Louise Hare, Sumana Khan, Ian Laskey and Dan Purdue – to hit the big time!