Posted by Sally Jenkins in Markets, Non-fiction on March 3, 2013

I bought Women’s Walking magazine this week, for two reasons: 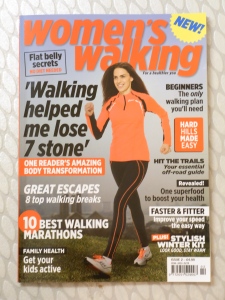 As far as market opportunities go, I’m not too hopeful:

Flicking through the pages and looking at the credentials of some of the magazine’s contributors tells me that I’m not qualified to pitch anything remotely related to the Health, Nutrition, Workout and Fitness sections of the magazine.

There’s a couple of ‘Real-Life’ features, one about a woman who lost seven stone by walking and another about a woman who walked her way back to health after an accident. Nothing so dramatic has happened to me (thank goodness!) so no openings there.

There’s a ‘My Life’ page, which tells the part that walking plays in the life of one individual woman. This month it is Pippa Kendrick, a published food writer – so I don’t think they’re looking for any Tom, Dick or Sally.

That leaves me to dream up a more general article. The magazine includes one this month on charity fundraising (for sponsored walks) plus a list of the best walking marathons. I’ve done a few 26 mile walks, so I wonder if I could do something along those lines…

But I think the best place to start is with the letters page – there’s a pair of walking shoes worth £90 for the star letter, nothing for the others. Nine letters were published in issue 2, mostly praising the magazine and describing what walking means to the writer. I’m going to think of something different!

And is it possible to devote a whole magazine to women’s walking? It appears so but there’s also lots of stuff in there about general fitness and equipment too. I particularly liked one of their tips for getting a flatter stomach – apparently a good night’s sleep is essential, people getting between five and six hours sleep have bigger waistlines than those sleeping for seven or eight hours – I like the idea of toning up whilst I’m dreaming!

So what do the rest of you do to combat the sedentary life of a writer? I go to the occasional BodyCombat class – lots of kicking and punching at an imaginary partner is great for getting rid of aggression – and I find swimming helps me think.