Planning a Novel and the First Draft

Posted by Sally Jenkins in Self-publishing, Writing on April 1, 2016

I’ve been busy with a whiteboard and pretty coloured Post-It Notes trying to plan my second novel. There’s no ‘right’ way of writing a novel but, in my opinion, it helps to have some idea of where the story is heading. So I’ve taken novelist Bella Osborne‘s advice and tried working backwards from a pivotal moment in the plot. For example, if the pivotal moment is X stabbing Y to death in a fit of anger in a remote field, then scenes coming before that must show X procuring a knife, Y doing something to make X angry, X travelling to the remote field etc. etc. 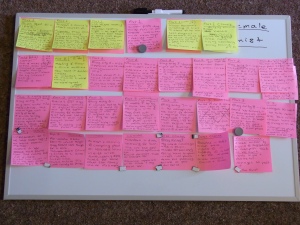 My plan looks very nice and it’s got my brain into gear but I know I will inevitably veer ‘off-piste’ as I get deeper into the story. That probably won’t matter and will make the writing process more exciting (the book is meant to be grip-lit!). And if I get totally lost then I’ll come back to my plan.

I intend to write the first draft as quickly as possible, NaNoWriMo style. But I can’t wait until November so throughout April I will be doing my own private NaNoWriMo. I want to write as quickly as possible to keep my brain focused and the story continuously moving forward in my head. The resulting manuscript will be for my eyes only and will require a lot of additional work. But I find it less frightening to edit and play around with words I’ve already written, until they’re at a publishable standard, than try to write to that standard in the initial draft.
And I will be repeating the mantra of writing tutor Alison May, “It’s OK to hate your first draft. It’s OK to hate your first draft.”

Finally I leave you with news that Bedsit Three (another grip-lit novel) has been accepted for inclusion into Kobo‘s ‘Deals Page Spotlight – Thrillers’ promotion for the first two weeks in April. Hurray! And, of course, Bedsit Three is also available on Kindle and in paperback.