Birth of a Novel

My first novel has just been launched into the big, bad world and I’m sitting here fretting. Perhaps it will sink without trace or people might hate it … 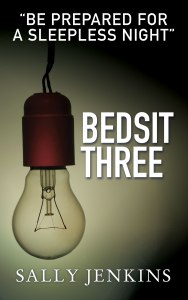 So, to stop me brooding, I’m going to tell you about how it came to be.

Let’s go back two years to October 2013. I went on a weekend writing course organised by Lois Maddox of Relax and Write. The title of the course was ‘How to Write the Mystery Novel’ and it was led by Eileen Robertson. At the same time I spotted a free-to-enter novel writing competition organised by WordPlay Publishing, there was no theme or genre specified but the hero had to be named ‘Ian’ (incidentally, that competition is on-going annually until 2017 if you want to have a go). I combined these two things together for NaNoWriMo 2013 and drafted the first 50,000 words of Bedsit Three.

I spent December 2013 writing a synopsis and polishing the first three chapters. I submitted to the competition just before the 31st December deadline. Then I gave up being a novelist and went back to short stories.

In May 2014 I received a phone call out of the blue. It was Michael Barton of WordPlay Publishing to tell me I had won the competition! The prize was formatting for Createspace and Kindle plus 250 Euros marketing budget and a financial contribution towards a cover design.

After my elation subsided, I realised that I had to knuckle down, finish the manuscript and get it ready for publication. When I thought it was done, Anne Harvey acted as a beta reader and I also had a critique from Patricia Fawcett. Lots of changes followed, including getting rid of a superfluous character, an unlikely coincidence and a lottery win. The ending of the novel also changed.

Then I decided that if Bedsit Three had won one competition, perhaps it could win another. So I entered a few more and was shortlisted in the Silverwood-Kobo-Berforts Open Day Competition and the Writing Magazine/McCrit Competition. This gave me confidence and I had the manuscript professionally edited by Mark Henderson. Then off it went for formatting and I looked for cover designers. I chose John Amy. He gave me five initial designs which I showed to a handful of people and their verdict was unanimous.

The back cover blurb was put to the vote in this blog post and I am most grateful to all of you who took the time to comment.

My first novel looks and feels very professional. Here’s the Amazon blurb that goes with it:

“A word of warning to anyone who picks this book up: be prepared for a sleepless night, because you won’t want to put it down until you get to the end,” Michael Barton, WordPlay Publishing.
A stupid mistake ended Ian’s marriage. Now he’s trying to put it right.
Sandra was a teenage mum. Now she’s fighting to make a good life for her daughter.
Maxine made an important decision behind her boyfriend’s back. His reaction devastates all their lives…
Every mother tries to do her best for her child. But sometimes that ‘best’ creates a monster.

Bedsit Three is a tale of murder, mystery and love. It won the inaugural Wordplay Publishing/Ian Govan Award and was shortlisted for both the Silverwood-Kobo-Berforts Open Day Competition and the Writing Magazine/McCrit Competition.
Michael Barton, Founder and Managing Director of WordPlay Publishing said of Bedsit Three, “This novel is well-constructed and well-written. But it’s also far more than that. It’s a book that elicits emotional reaction, drawing the reader into the story and placing him or her in the middle of the action page after page.”

‘Bedsit Three’ is available in paperback and Kindle format on Amazon and also as an e-book for Kobo.

A Disappointment, An Award and Kobo Writing Life

Posted by Sally Jenkins in Competitions, Non-writing, Successes on April 23, 2015

A few weeks ago I told you I was on a shortlist of eight for the Kobo-Silverwood Books-Berfort Open Day Writing Competition. I heard this week that I didn’t reach the final three. Congratulations to those who did: Phoebe Powell-Moore, Edward James and Sarah Channing Wright. Curiosity will definitely make me buy the winning novel when it’s published later this year.

It’s not all bad news though. As some of you may have seen on Facebook, I was awarded the Hwyl Stone (pictured) for Most Improved Speaker by Sutton Coldfield Speakers’ Club

.  This was a nice confidence boost. The stone is supposed to have similar properties to the Blarney stone and was collected in Wales and made into a trophy by a former member.

Kobo do seem to do more to help and motivate writers than Amazon KDP. Or have I just missed the Amazon stuff?

Shortlisted in a Novel Writing Competition!

Posted by Sally Jenkins in Successes on March 24, 2015

A bit of blowing my own trumpet today – I have been shortlisted in the SilverWood-Kobo-Berforts Open Day Writing Competition!

There are eight of us on the shortlist and there will now be a nail-biting time until the end of April when the winner is announced.

First prize is an ebook publishing package provided by SilverWood Books, with an additional print edition sponsored by Berforts Information Press. The publishing package will include a full copy-edit, proofreading, ebook and paperback cover design, formatting and conversion to epub, with a corresponding print edition. Plus, very importantly, publicity.

The shortlisting was done on the basis of a synopsis of the novel plus the first 5,000 words. I’ve now submitted the completed manuscript for final judging. I know there’s ‘many a slip twixt cup and lip’ so the chances of me actually winning are tiny but I’m going to enjoy just a little bit of the limelight while I can! And it’s good to know that the first 5,000 words of my novel aren’t absolute twaddle whatever the outcome of the competition.