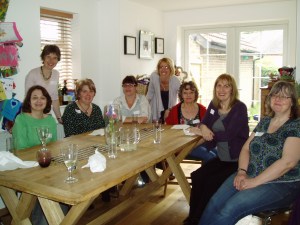 for women’s magazines. Joanna’s aim was for all of us to go home with a cast of characters and a basic outline for a serial that we could further develop ourselves. I thought it was a tall order but she succeeded!

There were 7 of us around the table (the picture shows us half way through a home-cooked lunch and waiting for pudding!) and as the day progressed so did our serials. From nowhere we produced story settings ranging from a Greek island, a solicitor’s office and a belfry. An equally disparate list of characters came to life and then we had to work on the bit I found really hard – a main plot plus a couple of sub plots…

Later it was down to planning that crucial first episode which has to grip the reader and make her buy the magazine again next week. But, most importantly, along with an episode by episode summary, it also has to sell the whole serial to the editor.

As we went through the day Joanna gave us a few rules to work with:

Most of these ‘rules’ are the exact opposite of short story writing where only a few characters play out the story in one setting within a tight time frame – so as someone who loves writing very short ‘coffee break’ fiction, this went totally against the grain for me.

One of the most important elements of a serial is the cliffhanger – and just to keep you on tenterhooks I’m going to save that plus how to submit your story to an editor for the next post !

In the meantime if you want to find out more about Joanna, her courses or her reasonably priced critiques – her website is here.

This entry was posted on April 14, 2011, 11:00 am and is filed under Events, Resources, Writing. You can follow any responses to this entry through RSS 2.0. You can leave a response, or trackback from your own site.