One year ago this week I published my first short story collection, One Day For Me, on Amazon Kindle. 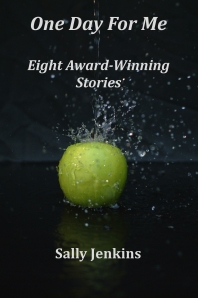 The book has amassed some great reviews on Amazon and Lee Ashford of Readers’ Favorite said, “Sally Jenkins knows how to build a story. She takes the mundane, and makes it intriguing. She hooks the reader, and reels him in. She proves her talent in each of these eight short stories, making this collection one you will be glad you read.”

Since publication lots of things have happened in my life including a health scare (early stage breast cancer – make sure you go for those mammograms, ladies!) and a complete upheaval in my day job (I was transferred from one company to another under TUPE legislation – don’t ask, it’s complicated!).

I’ve discovered that I’m not much good at book cover design and also that writing stories is much easier than marketing them! But over the last few months Amazon KDP have introduced a couple of features that make both of these difficult tasks a little bit easier:

So, to celebrate the first birthday of One Day For Me, it will be half-price (99p) from now until Saturday 25th January.

I hope you enjoy it!

This entry was posted on January 19, 2014, 9:00 am and is filed under Books, Computers & Technical, Lifestyle, Self-publishing. You can follow any responses to this entry through RSS 2.0. You can leave a response, or trackback from your own site.