The One Plus One by JoJo Moyes

Here’s an interesting fact for you – Tanzie (one of the main characters in The One Plus One) was named after the daughter of the highest bidder in a charity auction in aid of the Stepping Stones Down’s Syndrome Support Group. 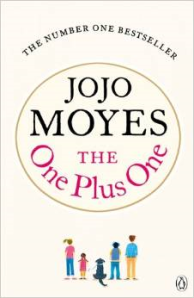 It’s a wonderful name and absolutely suits the young girl in the story. It makes me wonder if the book would have been different if someone named Hilda had been successful in the auction …

Anyway, I digress. I received this book to review for Mumsnet Bloggers. So here we go:

Tanzie is a young Maths genius. Her elder half-brother Nicky is being badly bullied. Jess, their mum, is struggling to keep them financially afloat with cleaning and bar jobs. They own a gigantic, drooling dog.

Ed Nicholls is wealthy, having made his money writing computer software. Then he makes a mistake and his world comes tumbling down.

This set of characters ends up on a car journey from the south coast to Aberdeen. Tanzie’s car sickness limits them to 40 mph. The dog’s digestive system pollutes the car. They live on sandwiches and food stolen from a hotel breakfast buffet. Relationships develop and are tested during the days and nights they spend cooped up together.

This is great light-reading and perfect escapism if you want to think about someone else’s problems instead of your own. I totally believed in this band of people and was rooting for each of them.

What more can I say – for me the characters make a book and these characters were brilliant.

Jojo Moyes, The One Plus One

This entry was posted on August 19, 2014, 12:42 pm and is filed under Authors, Books. You can follow any responses to this entry through RSS 2.0. You can leave a response, or trackback from your own site.