Over the past couple of months I’ve mentioned a few of my writing-related activities and I thought it was time to give an update.

At the beginning of April, I announced that I was going to use April as a ‘private’ NaNoWriMo and try to write a rough first draft of my next novel.  This actually took longer than planned. Partway through I realised that one of my minor characters had much more potential than one of my main protagonists. So I had to re-work much of what I’d done. I killed off the boring main protagonist (when he was only a baby!) and brought the minor character to the fore. I now have 58,000 words and a LOT of work to do.

At the beginning of June, I wrote that I’d uploaded Bedsit Three to Smashwords in order to get it into the Overdrive store, from which many public libraries purchase e-books. Once I could see it available in Overdrive, I went to my local library to ask for the contact details of Birmingham’s e-book buyer so that I could make myself known as a local author. Unfortunately, I was told that there was no budget at all for new books – not even e-books. On the plus side, they were receptive to the idea of an author event and (fingers crossed) will be contacting me in September when all the school holiday activities are over.

A couple of weeks ago, I launched a price promotion on Kindle for Bedsit Three. I reduced it from £2.25 to 99p for 2 weeks. I calculated that I needed to sell 4.5 times as many books at 99p as at £2.25 to make it a viable long-term price point. That number of sales hasn’t materialised so, barring a sudden surge today (30th June 2016) the price will rise again tomorrow.

And finally, I was pleased to receive a gift from Iain Pattison this week – a paperback copy of That’s Why The Lady is a Vamp. It’s a collection of off-beat comedy tales, full of unexpected twists and lots of humour. Plus, the high spot is a guest appearance by yours truly! If you’d like a free e-copy of one of Iain’s books pop along to his website now.

So that’s me. Anyone else got any news? 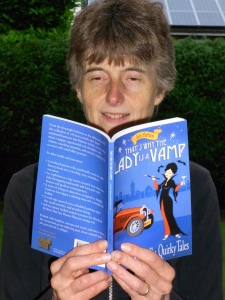 This entry was posted on June 30, 2016, 9:00 am and is filed under Promotion, Self-publishing, Writing. You can follow any responses to this entry through RSS 2.0. You can leave a response, or trackback from your own site.