If you read only one book in 2017 then let it be Mr Two Bomb by William Coles. I guarantee it will stay in your mind for a long time to come. 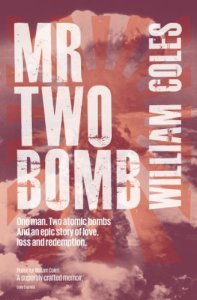 This novel is based on the true story of one of the twelve people who survived both the Hiroshima and Nagasaki atomic bombs. Having survived the first bomb, the main character (the story  is told in the first person and I don’t think he’s given a name) catches the last train back to his home, wife and child in Nagasaki and arrives 90 minutes before the next atomic bomb explodes.

There is much description of the terrible injuries and deaths inflicted by these bombs and there is no way this book can be described as ‘enjoyable’. However, if, like me, you were vaguely aware that America dropped these bombs on Japan but know little else about their impact, this book will be an education for you.

Running through the book is the question of whether the main character was blessed to have survived these two bombs or cursed to have been in the vicinity of both. This is a great example of a novel where the main character goes ‘on a journey’ and emerges as a slightly different person at the end.

Above all, I felt Mr Two Bomb was life-affirming – and I think there’s a case for it being required reading in secondary schools.

This entry was posted on December 31, 2016, 7:21 pm and is filed under Books. You can follow any responses to this entry through RSS 2.0. You can leave a response, or trackback from your own site.