It fascinates me how our past affects our present and future lives. The past might be our upbringing and parental influences, it might be something we did that makes us ashamed and secretive, it might be the impact of external events on our everyday lives.

Recently I went to see Chicken Soup in the Studio Theatre at the Crucible in Sheffield. 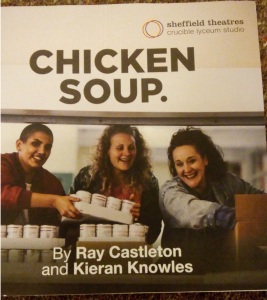 Written by Ray Castleton and Kieran Knowles, the play focuses on three miners’ wives and shows the effect the 1984/85 miners’ strike had on the rest of their lives, their family relationships and on their enduring friendship. There are three acts, each one in a different year: a 1984 soup kitchen/foodbank during the strike, a 2002 Queen’s Golden Jubilee party and a foodbank on the day of the 2016 EU Referendum. To add to the atmosphere the audience are given vouchers to claim a free serving of soup in the interval – forced to form a queue at a makeshift ‘soup kitchen’.

By 2002 and 2016 the lives of the three women have taken different paths. Following the strike one has become more politically active and is now a councillor. One has bettered herself by taking accountancy exams and ends up a high-flying career woman. The third seems stuck in the past, still carrying a hatred for her brother who crossed picket lines during the strike. Each has been affected in a different way by the past.

This made me think about my own characterisation when I’m writing fiction. Do I think sufficiently about how each character has come to be where they are? Am I dropping the important parts of their past into the story subtley or am I shoehorning in great hunks of backstory? Are the characters acting realistically, given what they’ve been through in the past? Why are different characters affected in different ways by the same past event?

What about you – do you think about how the past is motivating your characters’ actions in the present? How do you tell the reader about that past life? Do you know their past before you start writing their present?

This entry was posted on March 6, 2018, 12:15 pm and is filed under Events, Writing. You can follow any responses to this entry through RSS 2.0. You can leave a response, or trackback from your own site.