A Bit of Bronte Luck

Posted by Sally Jenkins in Authors, Travel on November 19, 2012

Do you ever think that only the lucky get published? I sometimes despair when, after hours toiling over a story, it wings its way straight back to me in its self-addressed envelope. 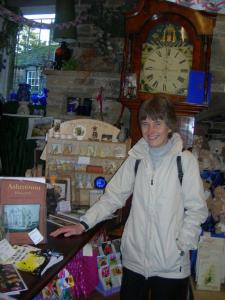 Last weekend I was in Haworth and heard that it was lucky to touch the old wooden post office counter, over which the Bronte sisters‘ manuscripts were sent on their way to London publishers. The counter is now in a gift shop (with a very friendly and obliging owner) and here is a photo of me trying to generate myself some luck! It was a shame I couldn’t actually send one of my stories over the counter and off to ‘success land’ – but perhaps a little bit of the Bronte success might rub off on me…

The highlight of this trip to Haworth was a guided tour with BronteWalks. I was brought up in West Yorkshire and had many trips to Howarth when I was younger but all that stuck in my mind from those visits was the tiny handwritten books that the sisters made as children and the drunken lifestyle of their brother, Branwell.

Our guide, Johnnie Briggs (no, not Mike Baldwin from Coronation Street!), soon put that right.  For instance, I didn’t know that:

Following the tour I visited the sisters’ Parsonage home with my eyes newly opened. I imagined the sisters discussing and critiquing each others work in the dining room and saw the room where Branwell died, with his family gathered around him. The Brontes lives were shadowed in sadness and beset by difficulties but despite this (or maybe because of this?) they produced world-class fiction.

So no more excuses – get writing and submitting! (A little bit of luck wouldn’t go amiss though…)