Archive for category Preparing to Teach in the Lifelong Learning Sector

Posted by Sally Jenkins in Events, Preparing to Teach in the Lifelong Learning Sector on January 24, 2019

A few years ago I did the PTLLS qualification (Preparing to Teach in the Lifelong Learning Sector) and this week I finally got around to putting it into practice by running my first creative writing workshop. It was organised by FOLIO Sutton Coldfield, held at my local library and free to participants. 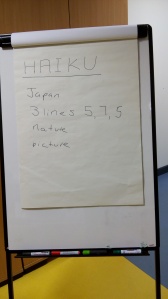 On the agenda was creating haiku and writing letters to magazines. I chose these two topics to give a mix of writing for pleasure and for profit plus the pieces were short enough to complete in the two and a half hours allocated to the class. And I already had a basic lesson plan for the haiku section from the ‘micro teach’ I did as part of PTLLS.

The participants were a lovely group of people. The workshop had been billed as ‘An Introduction to Creative Writing’ and most had done either none or very little writing before but they were all enthusiastic. Because we only had a couple of hours together, I chose to do a very quick, basic ice-breaker to start the session. I produced my large, bright orange (imaginary) energy ball and we each said our name as we pretended to pass it around the room and take a burst of energy from from it.

During the workshop I deliberately set most of the writing exercises to be done in pairs so that no one felt put on the spot or awkward if they were struggling to get going. We worked up to writing a haiku by looking at examples, having a pictorial prompt and jotting down ad hoc words and phrases before trying to craft them into the syllable count of a haiku. Similarly, we looked at how to analyse a magazine letters’ page including things like word count, subject matter and tone of the letters printed, before trying to craft a letter ourselves.

There were a few learning points that I took away from the workshop:

After running only one workshop, I don’t profess to be an expert on teaching creative writing – however, I know someone who is! If you’re looking for further information or advice on running creative writing classes, I suggest you take a look at Start a Creative Writing Class: How to Set Up, Run and Teach a Successful Class by my writing buddy Helen Yendall.

What Can We Learn From The Geese?

Posted by Sally Jenkins in Events, Lifestyle, Preparing to Teach in the Lifelong Learning Sector, Successes on December 11, 2015

Yesterday I went to a presentation organised by Birmingham Adult Education Service to collect my Preparing to Teach in the Lifelong Learning Sector (PTLLS) certificate. 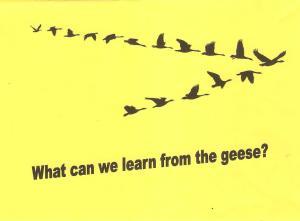 It was an inspiring event and as well as the certificate, I came away with two thoughts related to the virtual writing community of which we are all part.

Everyone at the presentation was given the sheet of paper shown on the right of this post and asked to think about it.
Then we were shown a three minute video about why geese fly in a ‘V’ shaped formation. As each goose flaps its wings it creates an uplift for the following birds, making their flight easier. This means that by flying in formation, the flock has a 70% greater flying range than if each bird flew alone. When the leading bird gets tired he drops back into the formation and another goose takes the leadership strain. If a bird gets sick and has to land, two other geese accompany him and stay with him until he is either well enough to fly again or until he dies.
This made me think about how we are stronger as a virtual group of writers rather than a single lone writer. Together we can help each other with publicity and promotion. We can offer support and encouragement when the going gets tough. Those who are feeling enthusiastic and strong can take the lead by trying something new and sharing their experiences with the rest of us. As a group we can all be more successful.

The celebration of success is the second thought I took away from the presentation event. A PTLLS certificate does not represent years of study and, in the academic world, it is quite small fry – but it’s worth celebrating. Celebrating each of our small achievements gives us the confidence and enthusiasm to take the next step forward along whichever path we have chosen.
So let’s all take a moment to reflect on our latest achievement – it might be meeting the deadline of a short story competition, plucking up the courage to pitch an article idea to a magazine editor, completing a synopsis, winning a prize, having a letter published in a newspaper, or anything else that makes you smile with satisfaction.
Record your achievement in the comments section beneath this post and let us all celebrate with you!

I’ll start the ball rolling. I’m chuffed to bits with an Amazon UK review for Bedsit Three which describes it as, “a psychological why dunnit reminiscent of Barbara Vine/ Ruth Rendell.”
What a great lady to be compared to!

I Passed My PTLLS Micro-Teach!

Posted by Sally Jenkins in Poetry, Preparing to Teach in the Lifelong Learning Sector, Successes on February 10, 2015

Today I did my micro-teach session on the PTLLS course (Preparing to Teach in the Lifelong Learning Sector) and I’m pleased to say that I passed!

I had a thirty minute session to fill, which at first sounded daunting but in reality, it is a very short time to teach anyone anything, especially when faced with a class of non-writers (i.e. my PTLLS classmates, none of whom are ‘into’ creative writing). I chose Haiku as my topic because it’s a simple, short form of poetry which can be ‘learned’ quite quickly.

Working in three small groups, my learners brainstormed a list of words from pictorial prompts which I provided and then they fitted the words together to create a 17 syllable, 3 line (5, 7, 5) Haiku. We heard them all read out and they were very good.

I’ve now got to write-up the experience for my PTLLS portfolio and am going through the peer review forms I received after the session. One lady (for whom English is not her first language) wrote, “I am now thinking of joining a Creative Writing class” and another, “It made me realise I actually could write a Haiku, which I didn’t believe at all when you first introduced the subject.”
So I’m chuffed to think that I may have inspired two non-writers to have confidence in their creative ability!

Finally I pointed the class in the direction of the PoemPigeon website, where anyone can post poetry and/or leave comments. The site also runs occasional competitions.

Posted by Sally Jenkins in Preparing to Teach in the Lifelong Learning Sector, Resources on January 29, 2015

More from the world of my PTLLS course …

My fellow learners and I each had to choose a piece of legislation affecting adult education tutors and give a short presentation to a small group. I decided to look at copyright law because of its direct impact on creative writing tutors, who may use extracts from other people’s work as examples in a class. This is a brief summary of what I came up with:

It is an infringement of copyright to do any of the following in relation to a substantial part of a work protected by copyright without the consent of the copyright owner:

The important word here is substantial.  It is subjective and the quality, importance or significance of the extract are as important as the quantity of words – using just four lines of a poem or even a four word extract have been found to be substantial.

Tutors working in colleges or similar places will probably be covered by the institution’s CLA (Copyright Licensing Agency) licence. In brief, this allows tutors to copy up to 5% of a published item e.g. one chapter of a book, a single article from a magazine, a ‘reasonable’ amount of text from a website. The source should always be cited on the copy and copies can only be given to students and members of staff.

The money collected from the sale of these licences is distributed back to writers via ALCS (Authors’ Licensing & Collecting Society), PLS (Publishers Licensing Society) and DACS (Design and Artists’ Copyright Society). If you’ve ever had an article or story published in a magazine make sure you register with ALCS to get your share of this money.

However, tutors who work independently in the private sector have to purchase their own CLA license or obtain the permission of the author or publisher each time they want to use an excerpt.
Alternatively it may be best to avoid using other people’s work and make up examples instead.

With all the cuts in local council spending, I guess more tutors may be forced to teach privately so the above is just something to be aware of.

Posted by Sally Jenkins in Non-writing, Preparing to Teach in the Lifelong Learning Sector, Resources on January 13, 2015

I’m currently doing the ‘Preparing to Teach in the Lifelong Learning Sector’ course (PTLLS). It’s one day a week for nine weeks and today was Session 2.

We’ve been taught that icebreakers are an important part of all adult education classes, whatever the subject. All the early sessions in a course should start with an icebreaker activity, so that participants can get to know each other and feel comfortable with their classmates.

Each of the eleven participants on my course has to run an icebreaker activity sometime over the next few weeks. I put my name down to go first because I hate things like that hanging over me. If it’s got to be done, do it sooner rather than later, is my motto.

So today I split the class into two groups and gave each group an envelope containing six cards. On the cards were written the details of two characters, two objects, a location and either the words ‘Happy Ending’ or ‘Sad Ending’. I asked the groups to create a very short story using the details on the cards. I stipulated that everyone in the group should contribute at least one sentence and each group should nominate a scribe and a spokesperson to read the story aloud. Then they had five minutes to get creative.

I was anxious as they opened the envelopes and got started. No one else on the course is a writer, their chosen subjects include Punjabi, parenting skills and dressmaking, so I wasn’t sure how they’d take to a writing activity. One group was slightly slower getting started until they got the idea of what had to be done, so I did have to give some extra time.

The two stories were read aloud and then I got feedback on the activity. Everyone enjoyed it and liked the fact that it was subject-related rather than just an arbitrary activity. And the tutor thought it went well. He added that if I used it again it might be worth having an extra card or two up my sleeve to throw at a group who finished early, to avoid them getting bored.

So far, as a class, we’ve done two other icebreakers:

Anyone know any other icebreakers?