Today I’d like to introduce you to psychological thriller writer, Jordanna East. 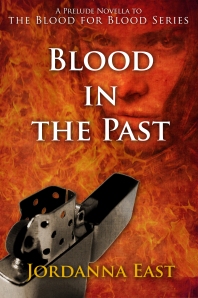 Her first book, Blood in the Past, is scheduled for release on June 19, 2013. Blood in the Past is the prelude novella to her debut Blood for Blood Series, which follows three lives entwined by deaths and consequences, revenge and obsession.

Like so many of us, Jordanna is publishing independently and I’ve invited her to guest on my blog because I like her marketing strategy. It started way before she had a book ready for sale. I’ll let Jordanna explain in her own words:

As an Indie Author, it’s kind of hard not to want to climb to the top of the tallest building in your city and scream “Take me seriously!” until your throat is raw. Self-published works are rapidly gaining ground, don’t get me wrong, but there are still some stubbornly ignorant people out there. These same people are the ones who will turn their noses up at your books. They won’t oblige you when you approach them for a review. And they’ll damn near laugh you out on your ass when you ask them to carry your book in their little bookstore. So what’s an author to do? Obviously, you want to write the best story you can. Of course, you want to hire a professional freelancer to create your cover art. And you most definitely—and I can’t stress this enough—want to hire a PROFESSIONAL EDITOR.

But these bullet points are pretty well known now, aren’t they? What if I told you there was something else you could do? There is. You can create your own publishing label. I did. I came up with Blood Read Press (pronounced Blood Red Press) last October. And it was so simple. I registered the name of the business with my county and state. I got myself a business checking account. And now, when a reader peruses Amazon, or some other retailer, they’ll see that Blood in the Past, the prelude novella to my upcoming series, has been released by Blood Read Press. It looks worlds better than the publisher being listed as Amazon. Or CreateSpace. It looks PROFESSIONAL. When I offer the book to a reviewer, they’ll take me seriously as well. So will bookstore owners. And that’s what this is about. Appearing (and actually being) professional so that the people out there with your career in their hands take you seriously.

Take a look at Jordanna’s website (scroll down her pages to see everything) and see how she’s branding both herself and her books in the build up to the launch date. In this way she is already creating an audience curious to buy and read her books.

Her website has a facility for interested people to sign up to her mailing list, in order to receive advance notification of book release dates. I’ve just joined it so that I don’t forget to have a look at her book on Amazon on launch day.

And, just to wet your appetite, here’s Jordanna’s book blurb:

The Blood in the Past.

Jillian Atford falls for an older man, a handsome Philadelphia cop, he’s married, a reality Jillian refuses to accept.
Lyla Kyle finds her mother dead on the floor from an apparent suicide. She blames her philandering father and wastes no time taking her revenge.
Detective Jason Brighthouse Sr. is in the wrong place at the right time to attempt to save a colleague from his burning home. When neither of them make it out alive, his teenage son can only harp on their last argument. He shoots himself in the head…with his father’s gun.

Three lives. Three deaths. One story. To understand the future, you must visit the past.

The Blood in the Past.

This entry was posted on May 14, 2013, 9:00 am and is filed under Authors, Books, Promotion, Self-publishing. You can follow any responses to this entry through RSS 2.0. You can leave a response, or trackback from your own site.