Mick Arnold – A Man in a Woman’s World

The USP for Mick Arnold’s debut festive novel is his gender.  The Season for Love is a Christmas romance and, unusually for a romance author, Mick is a man. I asked Mick how he came to be interested in writing love stories.

A mere four years ago, you could have described me as a typical male reader. I was (and always will be) a voracious reader of all things Terry Pratchett and general science-fiction. If you’d given me a romance novel to read, I’d probably have used it to prop open a door. Certainly, I’d never given thought to putting pen to paper or, nowadays, pop open my laptop. 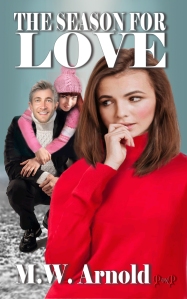 Then my lady wife persuaded me to read ‘The Christmas Factor’ by Annie Sanders. The next day, I opened my laptop and from who knows where, started to type, and type, and twelve hours later, I was finally persuaded to stop writing. So was born my first attempt at a novel and yes, it was a romance. ‘Flirty Something’ was born and remains unpublished. Not surprising really, as being my first attempt, the writing is poor, though I’d like to revisit it as the story is good (I like to think).
From somewhere, I heard about the Romantic Novelists’ Association New Writers’ Scheme and decided to join the multitudes clicking away at the ‘Send’ button at silly-o’clock in the morning, attempting to join. I got lucky when someone decided not to take up their position. Did I know what I was letting myself in for? Of course not, but it was the start of the most wonderful, unexpected ride of my life (apart from my marriage, of course)!
At no point I can remember, had I considered writing a book, let alone trying to get published. Yet, suddenly, I found I’d thrown myself into this new goal; and in a world dominated by the fairer sex. This latter was of no great surprise. What was, was the way in which I found myself welcomed into what can still be, a world every bit as alien as any created by Ridley Scott. I now know more about Jimmy Choos, Louboutin and Burberry than I would admit to any other red-blooded male. Such is the life I’ve chosen to enter.
I’ve never been happier to have made this accidental choice though and as I come towards the day each author dreams of, the release of their debut novel, I couldn’t have wished for a more supportive bunch of people to have shared this journey with. It’s still a little intimidating when I’m surrounded by all these talented ladies, not helped by being a naturally shy person, but I can’t imagine a more supportive group of people who make me welcome into what is and will always be perceived as a genre dominated by women.
Albeit, a little diluted by my good self now.

About The Season for Love
Believing she was responsible for the death of her husband, Chrissie Stewart retreats from all those who love her. A chance meeting with mysterious stranger, single-parent Josh Morgan and his bewitching young daughter Lizzy, breathe new life into her and gradually, she feels able to start to let go of the memory of her lost love. Unexpected links are revealed between the two families that strengthen the growing bonds she feels to this man and with the encouragement of her best friend Annie, herself hiding a hidden conflict from Chrissie, she battles with her demons to believe in her ability to trust and love again. Everything comes to a head on Christmas Day; which all goes to show that this is truly The Season for Love. 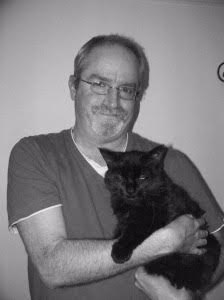 The Season for Love is available from Amazon US , Amazon UK , Barnes & Noble, Bookstrand , Smashwords , Kobo US and Kobo UK

About Mick Arnold
Mick is a hopeless romantic who was born in England, and spent fifteen years roaming around the world in the pay of HM Queen Elizabeth II in the Royal Air Force, before putting down roots, and realising how much he missed the travel. This, he’s replaced somewhat with his writing, including reviewing books and writing a regular post at the http://www.NovelKicks.co.uk blog site.
He’s the proud keeper of a cat bent on world domination, is mad on the music of the Beach Boys and enjoys the theatre and humouring his Manchester United supporting wife. Finally, and most importantly, Mick’s a member of the Romantic Novelists’ Association.
Twitter – https://twitter.com/mick859
Facebook – https://www.facebook.com/MWArnoldAuthor/ 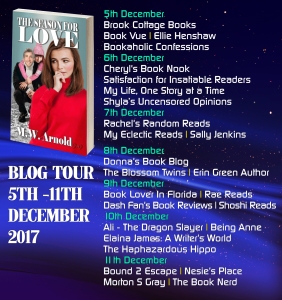 This entry was posted on December 7, 2017, 5:00 am and is filed under Authors, Books. You can follow any responses to this entry through RSS 2.0. You can leave a response, or trackback from your own site.