I’ve written before about Judith Cutler, known as Birmingham’s queen of cosy crime. She has a knack of creating feisty female lead characters and also a prolific output. Judith knows her fan base well and how to please them, which she does time and time again. Her books are very readable and so I was pleased to hear about her latest novel, Head Count. This is the second in a series of novels featuring Jane Cowan, a primary school head teacher. 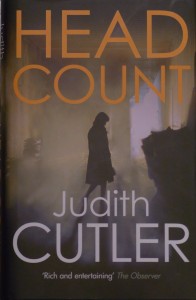 In Head Count, Jane Cowan gets mixed up in the horrors of people smuggling, in particular children arriving in the UK alone and having to fend for themselves. It is cosy crime with a realistic and very topical sharp edge. As a writer I found the structure of this book very interesting. Generally, crime fiction begins with a body on page one and then the hunt is on to find the killer. In Head Count, Judith Cutler takes a different tack. The story starts with Jane being knocked off her bike and into a hedge. She’s not badly hurt and an elderly couple help her back on her feet – but when Jane later goes to their house to thank them with flowers, the couple have disappeared into thin air. From that point on the mysterious happenings come thick and fast – no local builder will touch the renovations needed to Jane’s house, a village do-gooder constantly interferes with Jane’s school and two small boys with no English keep turning up at the school’s breakfast club.
If you want to find out how to create a layered mystery rather than a traditional whodunnit, Head Count is worth a read.

Head Count is authentic and well-researched. As well as being a head teacher, Jane Cowan is also a cricket umpire and match descriptions and after match socialising events in the novel feel real. Jane Cowan also has friends in the police and I’m guessing that Judith Cutler does as well – the police involvement in the book appears true to life, in particular there’s a clever piece of advice included in the narrative about how to make a 999 on a mobile phone when you are in the process of being kidnapped and can’t speak out loud to the operator. It’s worth reading the book just for this advice – it might save your life one day!

Judith Cutler is not afraid to tackle topical and controversial  issues but she does so in an empathetic and accessible way. If you like your cosy crime to be relevant to today’s society, rather than 1930s golden age, Judith Cutler is an author to watch out for and Head Count is a good place to start.

Now I’m off to catch up with the first book in the Jane Cowan series, Head Start.

This entry was posted on December 31, 2017, 5:12 pm and is filed under Authors, Books. You can follow any responses to this entry through RSS 2.0. You can leave a response, or trackback from your own site.